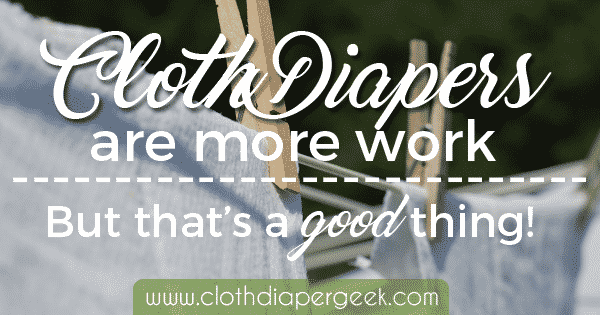 Are cloth diapers really more work than disposables?  Yes, but that shouldn’t scare you!

We’ve all said it at one point or another, cloth diapers aren’t more work than disposables.  They reduce the amount of trash we have to take out and save us those pesky midnight trips to the store when we run out of diapers.  I’m here to tell you that if we said that they we were lying. Very few of us would likely find ourselves in the position to have to run to the store at midnight to buy disposables.  True, cloth diapers will create less waste but is taking the trash out all that hard?  Maybe if your garbage can is at the end of a mile long driveway.

Cloth diapering is a great lifestyle choice but it’s not less work than disposables and I don’t think we, as advocates, need the “less work” selling point in order to convince others to try it or validate our own reasons for doing it.  Cloth diapering is more work and that’s one of the things I like most about it.   Let me preface by saying that it’s not backbreaking work, it’s rewarding work.  It’s work with many benefits and rewards, work you feel good about doing.

“…it’s rewarding work.  It’s work with many benefits and rewards, work you feel good about doing.”

Disposable diapers are more convenient, it’s a fact, as are styrofoam plates & cups, plastic water bottles, maxi pads and grocery bags.  But where has convenience gotten us as a planet?  Did you know that in 2014, over two years ago, scientists estimated CONSERVATIVELY that there were at least 5.25 trillion pieces of plastic in the world’s oceans.  Why?  Because plastic was used to create all our modern conveniences.  From shopping bags to water bottles, skin cremes to clothing, diapers to furniture, plastic is in everything. We all came from families who weren’t afraid of work.  Our ancestors washed clothes by hand and line dried them.  They cooked, cleaned, mended with needle and thread, built and fixed things when they broke, rather than tossing and replacing them.  Modern and disposable versions of everything came around to create less work and make life easier, that WAS the essence of modernization.  You can’t knock your great grandmother for wanting an electric washing machine or old pa for wanting a model T, and when disposable diapers were invented they were a luxury that not everyone could afford but that most strived to. Today it’s the opposite, the convenient choices are the cheapest and the most disposable.   This makes it hard NOT to choose the most convenient versions of everything.

Now don’t get me wrong, being a mother of diapering age children is hard enough without adding extra work, but cloth diapering’s benefits outweigh it’s disadvtanges in my opinion. Often the things you put the most work into become the most rewarding and this is true with every aspect of parenting and raising a healthy happy family. Cloth diapering taught me responsibility, opened my eyes to the amount of waste my family creates in other aspects of our lives and led us to make greener choices that we had previously never considered.  Cloth diapering also exposed me to a community of caring people who set examples, inspired me and lent support when I needed it.  It also showed me that putting effort into a decision I made and following through, despite the extra work, was ultimately rewarding and something to feel proud of. I’ve found that when it’s all said and done, the benefits I enjoyed the most from having chosen to use cloth diapers are not the ones I expected or signed up for! Do you enjoy the work involved in cloth diapering despite the fact that there are more convenient options? P.S. This post is not intended to make anyone feel bad for their decision to use a diapering method other than cloth.  I simply hoped to point out that choosing cloth is as rewarding as growing your own vegetables, building your own bunk beds and preparing a home cooked meal for your family each night.  There will always be options that involve less work and that are more convenient, that doesn’t mean we have to choose them.

Thinx Period Panties vs. Cloth Pads, Which should you choose?
#SummerCravings and a prAna Sun Dress Giveaway! {Ends 6/24} 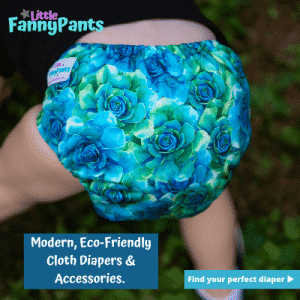