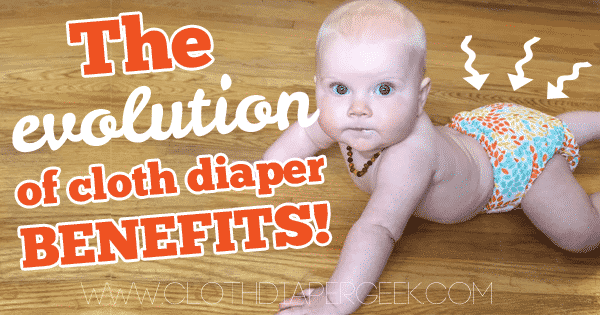 We began cloth diapering for one reason alone: money. Now, we cloth diaper for a myriad of different reasons that we never even considered back when we were two months pregnant with our first and thought that using the Gerber prefolds and plastic pants found at the bottom of the baby section in Walmart was our only option. Thankfully, we discovered modern cloth diapers which suddenly made the dive into reusable products seem so much more doable to a couple of rookie parents.

The first thing I started thinking about once we started using cloth was how we were helping preserve our environment. We did disposables for the first month or two of my oldest’s life—basically until we’d amassed enough cloth diapers to go full time—and we were amazed at the amount of trash diapers created in just one week. It felt good not to have that extra bag out on the curb once we were finally in cloth diapers full time.

Switching to reusable products in other areas.

Once we became more appreciative of the money saving/environment saving properties of using cloth diapers, we started switching to reusable products in as many areas of our life as we could! Paper towels, cloth wipes, reusable menstrual products, real dishes, and cloth napkins became standard fare in this house. It’s nice that the only disposable things we purchase here are toilet paper and tissues. Actually, my kids think things like paper diapers are novelty items because they see them so rarely.

Becoming more aware of toxins in other products.

Once we started using cloth we began thinking about all the toxins we were keeping from our daughter in just that area. This made us start looking for other ways to keep her from harmful, yet common, household chemicals. We started making some of our own cleaners, avoided using bleach, and we always use natural remedies first before resorting to pharmaceuticals thanks to the way cloth diapers started changing the way we think about common household products and their effects on our bodies. From there we started avoiding processed and prepackaged foods and became a (mostly) whole, fresh foods family. I’m not sure if that would have happened if we hadn’t taken a step into the crunchy world via our reusable diapers.

No extra trips to the grocery store.

It never occurred to me that using paper diapers may mean emergency runs to the grocery store. We were given a bunch of disposables for shower gifts and we never ran out of them before our cloth stash was full. In fact, I ended up giving away about two bags of diapers after a couple of months. Only when I watched a friend of mine text her husband frantically to tell him they needed diapers did I recognize how nice it is to save that gas and time by simply laundering the diapers we already have.

Who knew that diapers could be part of a micro-fashion ensemble? There are colors and prints to go with every outfit, and the diapers stand alone on those hot summer days. Even when my stash is complete, sometimes I can’t resist the urge to purchase the newest print or color from my favorite cloth diaper brands it just looks so cute on my baby’s fluffy bottom!

I love how customizable using cloth diapers can be. There is an option for everyone. There are many different types and brands of cloth diapers and within those labels there are usually more options for things like fabrics and closures. If you want cheap, there is cheap. If you want quick, there’s quick. If you want something easy to wash, there’s that too. From your grandmother’s prefolds to modern all in one and pocket diapers, there really is something for everyone.

Once you have your stash, you are done buying diapers until you’ve diapered and potty trained at least two babies (many times more). Of course, if you want to buy more or you feel like re-stashing, that’s another issue entirely. Just because you don’t have to buy more diapers doesn’t mean you can’t. Everyone has their main reason for using cloth diapers. I’ve already told you mine. What you may not realize is that once you switch, you’ll find so many other reasons to use cloth that will make it hard for you to ever go back to disposables. Are you experiencing any unexpected benefits of cloth diapering or have your reasons for choosing cloth diapers remained the same?

Go WILD With These Random Acts of Kindness Ideas!
Is the Smart Bottoms Dream Diaper a Dream Come True? {Review}