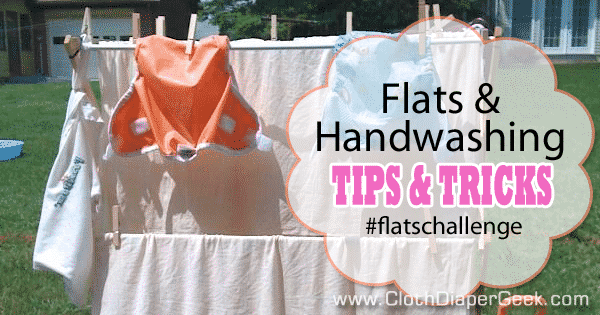 Back in 2011, I did the Flats and Handwashing Challenge for the first, and only time in my years of cloth diapering and it was an eye opening experience. First of all, I’d been sort of terrified of flat diapers and even still prefolds to some extent, and forcing myself to use them exclusively helped me to grow to appreciate them. Second of all, it showed me that full time cloth diapering on a tight budget with a tight schedule and no washing machine—though entirely possible—wasn’t something that I felt was completely attainable my family, which is saying a lot since I’ve always been an all-cloth-diapers-all-the-time type of girl.

That said, it is a fun experience and a nice way to help open our eyes and the eyes of many to the problems that parents in poverty face. I highly recommend that you join the Flats and Handwashing Challenge or spend a week doing it on your own because you’ll learn so much about cloth diapering that you probably wouldn’t know otherwise! For instance, I found that flat diapers are great for camping and also awesome for newborns. Who knew, right?

So, without further ado, here are my tips for challenging yourself to using only flat diapers, with no more than five diaper covers, while also hand washing them all.

Learn the folds. Spend a little time experimenting with different flat folds on your baby to see which folds you like. Some folds work better than others for certain babies. Besides, it’s a little like doing paper origami and there’s a weird sense of satisfaction in learning different ways to get that diaper to fit nice and snug over your baby’s bum. My favorite folds are the kite fold and the airplane fold. You can also try fun folds like the diaper bag fold and the origami fold, or even just the simple pad fold.

Choose your most functional diaper covers. When I did the flats challenge, I chose the diaper covers that had already proven to be the best. I prefer covers with little flaps at the front and the back to accommodate a pad fold, and that can be wiped clean between uses. I also prefer covers with snaps so that curious little baby hands can’t open them as easily. Personally, I found that it was better to skip the wool during the flats and hand washing challenge as the idea is to limit yourself to only five covers. Wool takes a bit longer to dry between washes and it also needs to be aired out between diaper changes. Ideally, you don’t need to wash your wool any more frequently than every two weeks, but if your kid surprises you with a really messy poop, you may find yourself with a few covers out of commission for a day or two. 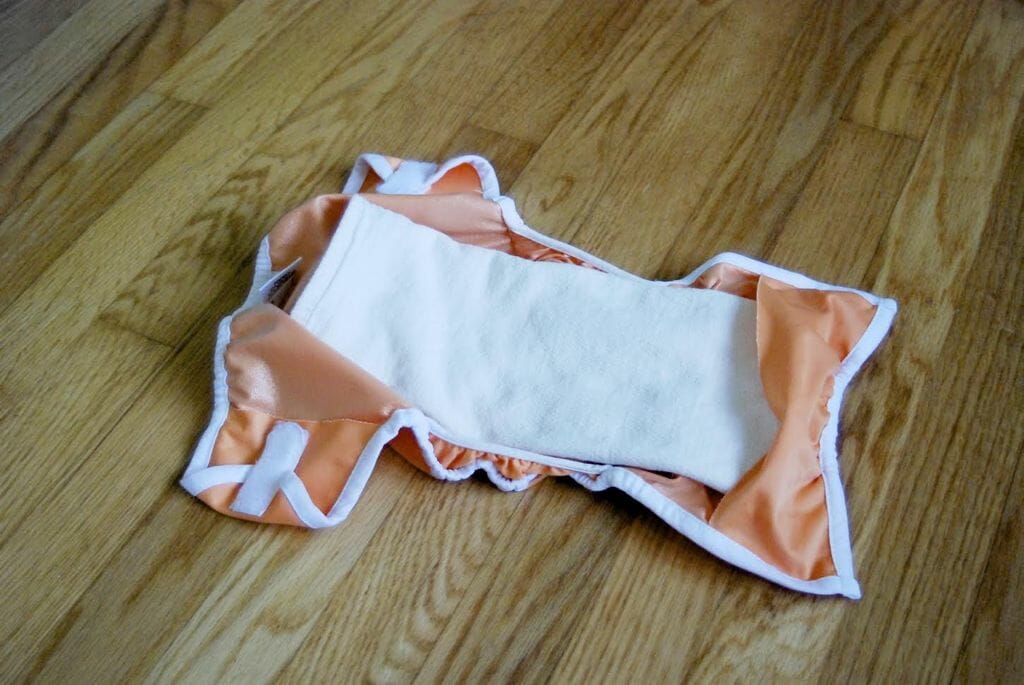 Prep like an AIO for caregivers. I participated in the flats and hand washing challenge when I was working part time and my daughter was in daycare, so I just pad folded my flats and laid them into her PUL diaper covers and put them in the diaper bag the way I normally put her pockets and AIOs into her diaper bag. The downside to doing the flats challenge when using a day care is that they aren’t allowed to use the cover for multiple diaper changes and will need to throw the entire thing into your wet bag, but since my PUL covers dried so quickly, I found that if I washed them every day, they were still ready to go for the next morning. My husband also really liked the “AIO” approach, almost never using the fancy folds that I had ready to go for him. He always used the pad folded flats, switching out the wet one for a fresh one at every diaper change. 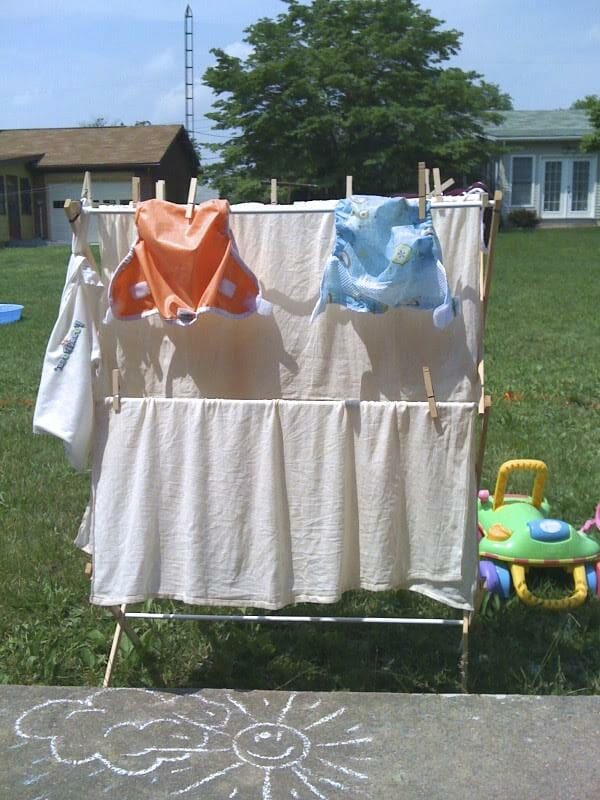 The sun is your friend. Flat diapers wash and dry very quickly even given the worst circumstances, but if you dry them in the sun, they can be completely dry in 10-20 minutes as opposed to a couple of hours. If it’s nice out, take advantage of that sun and hang your flats on the clothesline, or pull your drying rack outside. You’ll be glad you did!

Use your feet! I washed my flats every evening in our bathtub, and I agitated them with my feet which made me feel a little like Lucy and Ethel when they got to stomp out the grapes on their visit to Italy. This helped my arm muscles from getting too exhausted from all the washing (they were pretty tired from wringing all the diapers out), and gave me a little exercise too! 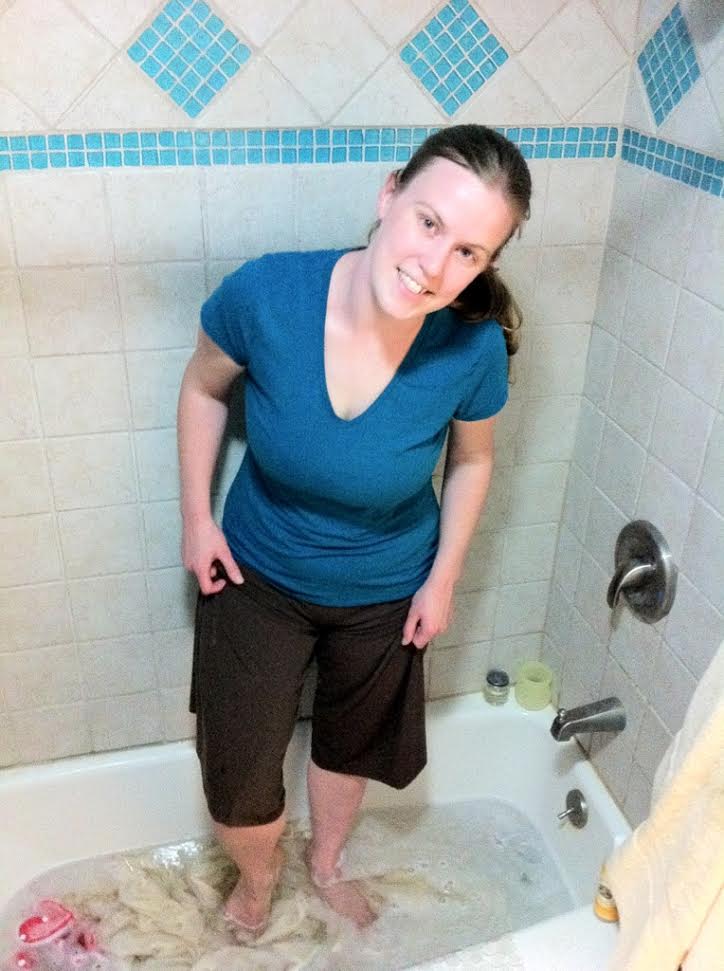 Have help wringing them out. It’s important to wring out your flat diapers before hanging them to dry as this will cut their drying time down exponentially. I learned quickly, though, that it takes a lot of muscle to wring out my flats effectively, so I asked my husband to help when I got to this point. It might also be nice to ask an older sibling to assist with this step.

Try a camp washer. A simple plastic bucket with a hole cut into the lid and a clean plunger make a nice little camp washer. Fill the bucket with water, detergent, and your diapers, insert the plunger into the hole, close the lid, and pump up and down to agitate the soap and water through your diapers. Then open, dump, and rinse. Pretty easy and great for camping, as I found out through experience when we took my cloth diapered baby to a three day Christian music festival.

Fold ahead of time. Fold your flat diapers into whatever folds you prefer before storing them in the changing table or cloth diaper drawer. I actually fold mine into a mix of different folds: some fitted folds like the kite fold and some pad folds for my husband who hates using pins or snappis.

Wash as frequently as possible. I made it part of my routine to wash my flat diapers every evening. I washed them that frequently because it helped keep the size of my loads down and it also gave me some leeway if one day I suddenly found I didn’t have time to do my diaper wash. In addition, I washed a couple of diapers as my daughter soiled them, which only took a couple of minutes after each diaper change. 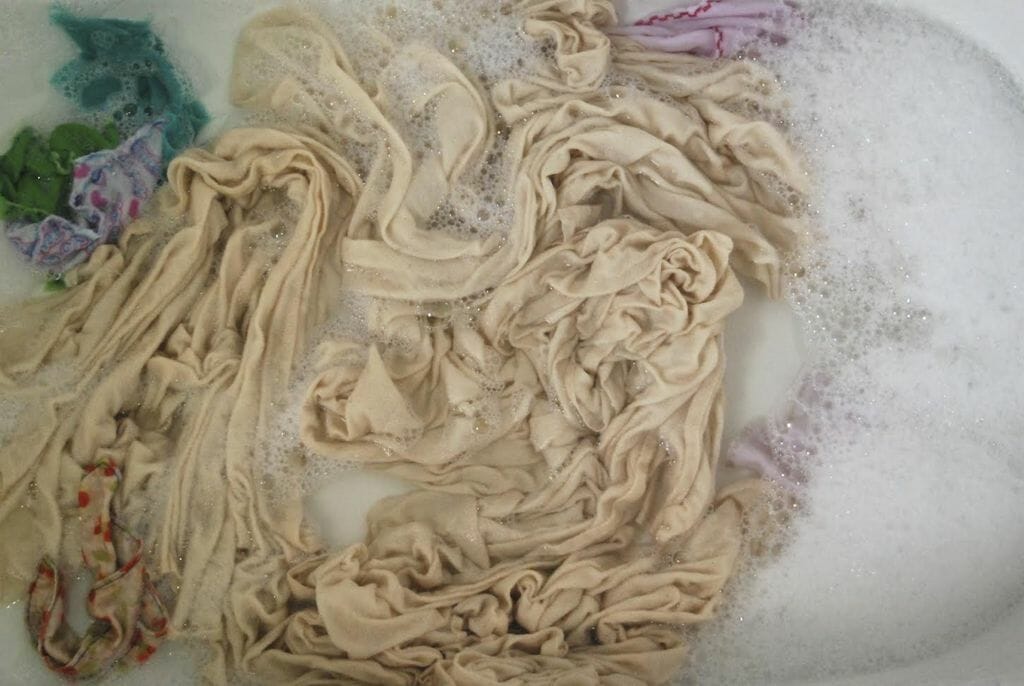 Have big stash of flat diapers. The birds eye cotton flats or flour sack towel versions are super cheap, and the more you have, the less frequently you have to wash them. Having a little extra might free up some time in your schedule and help you make sure you don’t run out if, say, you happened to have a crazy Tuesday that week. That said, the less frequently you wash them, the larger your loads will be, which isn’t as big a deal when washing flat diapers as they do wash rather easily.

Do it with a friend! Everything is better when it’s done with a partner. You’ve probably already discovered how motivating it is to stay on a new diet or an exercise regime if there is someone to be accountable to. The same stands for doing any challenge—such as the flats and hand washing challenge. One of my friends loves flat diapers and she is part of the reason that I have discovered some of my favorite new folds and the reason I use flats as frequently as I do. For over a year, I used flats solely as stuffing for my pocket diapers thanks to her advice. They are amazingly absorbent and much easier to wash than microfiber!

Don’t pressure yourself. The point of the flats and hand washing challenge is to bring awareness for parents with diaper needs and to provide a possible alternative for that need. Using flat diapers and hand washing them all the time isn’t for everyone—some people find it is a very viable option, and some people don’t. If you’ve committed to doing the challenge, then do it as long as you can, and when you can’t do it anymore, that’s fine. However, I think you’ll find, as I did, that even though you wouldn’t use and hand wash flats all the time, you will find times in your routine where doing so is very necessary—like on a vacation, or during those few days when your washing machine is on the fritz!

If you’ve decided to do this challenge, have fun with it! I know I certainly did! And if you didn’t officially join the challenge, that’s okay, you can still challenge yourself. The Flats and Handwashing Challenge isn’t just about bringing awareness to poverty, but also about trying something different and possibly finding new solutions for your family’s needs.

*This post does contain some affiliate links.  Thank you for supporting my work at home mom owned business.

A Mama’s Journey to a Paleo Lifestyle!
Win a Pure Echo Mattress {$529 Value} from MyGreenMattress.com!