I vividly remember the first time I heard the word “menstrual.” I believe I was creeping up on my tenth birthday and my mom had taken me to the pediatrician because I was having consistent stomach pains. The doctor examined me, discussed a few things with my mom and we were out the door. On the way home I had this burning question I just had to ask my mom, “Mom? What are mushroom cramps?” That began my journey into womanhood.

I’ve had my period for 19 years but it wasn’t until I was in high school that I felt comfortable enough to use a tampon. When I first got my period my mom showed me a tampon and explained how it was used. She encouraged me to give it a try if I wanted to. I brought it into the bathroom and stared at the pictures. Now, this is a ten year old who had just learned the real way to make babies a few weeks ago. There was no way I was going put anything into some hole in my body!
Fast forward to present day and here I am 29 years old primarily using tampons and despising pads. (It’s like wearing a diaper, a disposable diaper that is…) I had read a few articles about menstrual cups over the past year and had just written them off in my mind of “things I’ll never try or do” list. It wasn’t until one of the girls I led as a senior high youth leader was hospitalized for TSS that I started to reconsider. She’s in her early 20’s; far too young to have experienced TSS.
You see when you use a tampon it absorbs your flow. It expands the more that is absorbed which, if you’ve left it in for too long, can either start leaking or become rather uncomfortable. If there isn’t enough for the tampon absorb you can be left with a dry and sticky feeling. I hate taking out a tampon when it’s dry; talk about uncomfortable! There’s something to that dryness though – tampons can leave fibers in the vaginal canal when they are taken out. Also the absorbent nature of a tampon dries out the mucous membrane. Yes, it’s nice to feel dry during thattime of the month but I also end up feeling itchy because of it.
Enter the menstrual cup – Most cups today are made from medical grade silicone and cups that are sold in the US are FDA approved. Believe it or not the first cupwas invented in 1939 by a woman. This cup was made of hard rubber (and I’m sure you’re squeezing your legs together right now as I am) but that model failed. Other models later came onto the market and also failed until during the 1980s a soft cup model gained popularity. Enough of the history lesson though! Onto the nitty gritty details you’re wanting to know! 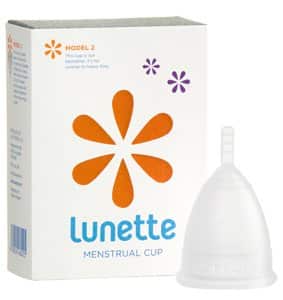 On my Facebook page I had a few questions about using a cup so I thought I’d answer them “list” style since the majority of us who are reading this are moms with young children. You don’t have time to read a wordy “novel” about a menstrual cup.
Is it hard to put it in?Great question and I wondered the same thing. I am more on the conservative side so I haven’t experimented with myself. Honestly using the cup was my first experience “down there.” I was surprised though by how easy it was to insert it! Simply put you fold the cup into a “C” and insert it in the same way you’d insert a tampon. I actually liked that after the cup was inserted I could manually move it around if it felt uncomfortable. My uterus is really tilted towards my back so I don’t know if that affects how a tampon or cup would be inserted but I do know that I have to get a tampon in just right. If it’s not inserted correctly I have to pull it out and throw it away. I’m picky about it too so more often than not I’m wasting bunches of tampons per day. A cup is not inserted into the cervix, rather it sits lower in your vagina. It’s because of this placement that having a cup is probably better and more comfortable for someone with a tilted uterus like me. Plus, the cup is awesome because I didn’t have to take it out if it felt uncomfortable. I could leave it in and move around or use my finger and move it around.

Can you really leave it in for 12 hours?Yes. Well, 12 hours is the absolute most length that the cup can be left in. Some leave their cup in for four hours, some six. The longest I left mine in was ten hours. I cannot tell you the relief that gave me. I mean I have days where I forget to pee let alone take a tampon out.
Why has the cup not been associated with TSS? Since the invention of the menstrual cup there have been no reported incidents of TSS in users. According to the FDA, TSS, while it’s rare, is more likely to occur in women using tampons because the amount of blood and discharge a tampon can absorb. This is why there are varying “sizes” of tampons, it’s all about absorbency. The more absorbent a tampon is, unfortunately, unless you’ve got the absorbency of your flow figured out properly, the more at risk you’re putting yourself.
A cup isn’t like that. It doesn’t absorb or change the composition of the blood in your vaginal canal. It “catches” the blood and debris being flushed out. You don’t have to mess with finding the correct absorbency the way you should with a tampon. Just remember incorrect absorbency might equal increased chances of TSS.
Are there other medical concerns? Now if you do a Google search on a menstrual cup you will encounter many finds regarding a petition that was submitted in 2003 by the Assoc. of Pharmacologists & Toxicologists to the FDA. The Association claims that in theory, not based on any scientific evidence, a menstrual cup may cause endometriosis because a cup can cause backflow into the uterus. Many brands of cups do have information regarding this but the FDA response was that this was all in theory and cannot be proven as fact.
How many should I buy? I have one cup and the majority of research that I could find didn’t specify how many one should own. I would like to have another cup so that I can keep it in my purse but I don’t think that’s a necessity, it’s more for convenience for me than anything else. Per cycle you should only need one cup.
How do I care for my cup?Upon first use of your cup you should wash it with mild fragrance-free detergent and then boil it in a pot for ten minutes. After that you should rinse your cup out with cold water and then warm water. You should disinfect the cup once a day by either using special disinfecting wipes or boiling it for five minutes. In-between cycles your cup should be stored in the bag that is provided, not a plastic bag; the cup needs to “breathe.”
Doesn’t everything spill out when you remove it?I was worried about this too so I decided that I’d stand in my bathtub until I got the hang of it. I’m happy to say that it was so easy that I really don’t feel like I need to stand in my bathtub! Removal of the cup is simple: Locate the tab first, if you can’t find it bear down which will move the cup down so you can reach the tab. Then by moving the tab back and forth adjust the cup so you can reach the base of it. Pinch the bottom of the cup to release the suction and then you can fully remove it. If you try to use the tab to pull it out without first releasing the suction you will have a big mess. It’s not a tampon so don’t treat the tab like a tampon’s string!
You can find a wealth of information about the cup from different brands. I think the best advice that was given to me about it was to use it first and cut the tab down little by little until I got the most comfortable length. I also went into using it with the mindset that it might take some getting used to. I’m happy to say that I will never being going back to tampons again and that says a lot considering how skeptical I was!

So have you considered a Menstural Cup?  Do you already use one?

Elizabeth (aka Bert) is a stay-at-home-mom and contributing writer for She Thinks Media. She lives in the Twin Cities with her husband, Ben, her son Buggie, and daughter Lady Bug.  When she’s not trying to convince Buggie to expand his interests beyond Thomas the Train or put his pants back on she’s writing about her experiences as a mom on her blog, First Time Mom (FTM). After all, Bert maintains there’s a first time for everything, even if you  have more than one child!
Share
Pin
Tweet
0 Shares