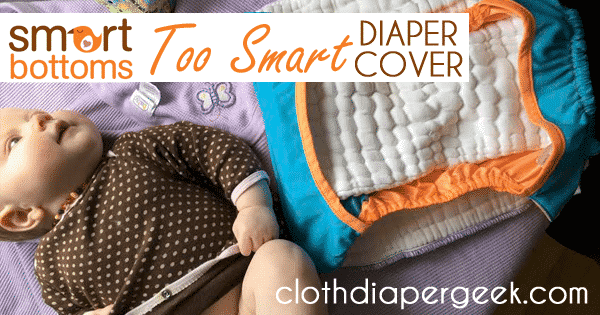 I received a Smart Bottoms Too Smart diaper cover in the mail and I was so, so excited to begin reviewing it because I have heard many great things about this brand. A friend of mine swears by their Smart One AIO cloth diapers and I’ve seen how adorable they are on her babies’ bums, so it’s a real treat to have something from Smart Bottoms myself.

If you’re like me and you like to scan through a post to find the important details, here’s a quick rundown of what I’m about to say:

When I got the cloth diaper cover, the first thing I did was to examine it and compare it to other one size diaper covers I already own and love. Right away I noticed the high quality construction. The PUL is thick, and edges that are often just serged* on other covers, were enclosed in a strip of fabric similar to biased tape. I also noticed leg gussets that are deeper than any I’ve ever seen before. There are inner pockets or flaps at the front and back of the inside of the diaper for slipping in an insert or prefold. My favorite part of the cover, is the contrasting colors. Normally, an orange diaper cover is just orange. This orange diaper cover is also blue and green. My son absolutely adores it, orange being his favorite cover and he’s already a bit possessive of it, asking for “my orange diaper, Mommy.” The price for Smart Bottom’s products has always been a bit of a drawback for me. Now that I’ve seen the construction and care that was put into one of their products, I understand their justification in slightly increased pricing over other one size diaper covers and I’d be willing to pay for such quality workmanship. 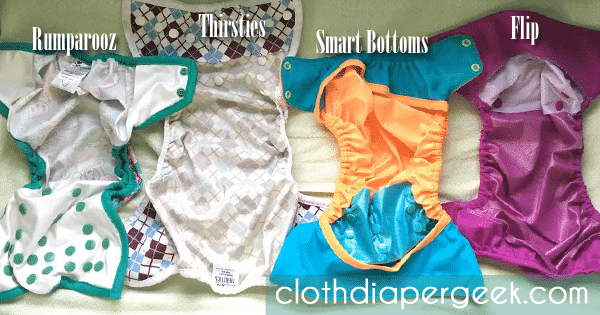 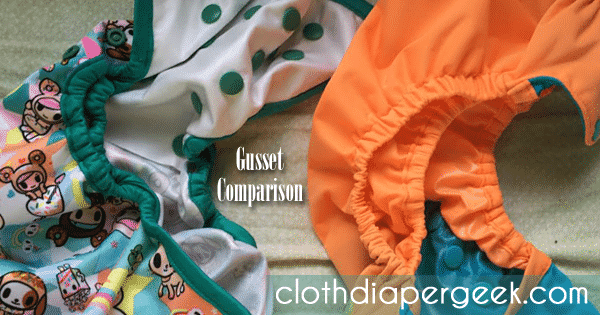 I have two babies in cloth diapers: a three month old girl who wears size 3-6 month clothing, and a two and a half year old boy who is just starting to wear 3T. Both of them tested this diaper cover for me. I had to bribe my son with money in his piggy bank to get a few of the pictures I took of him, though, as he is becoming more self-aware these days. 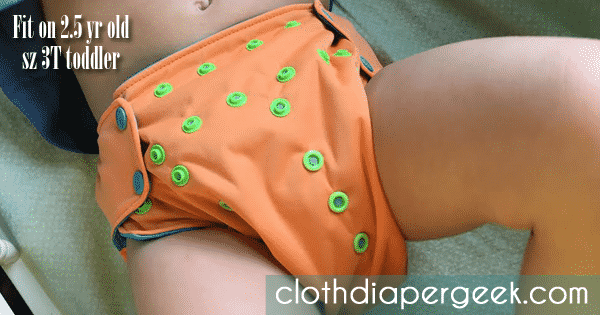 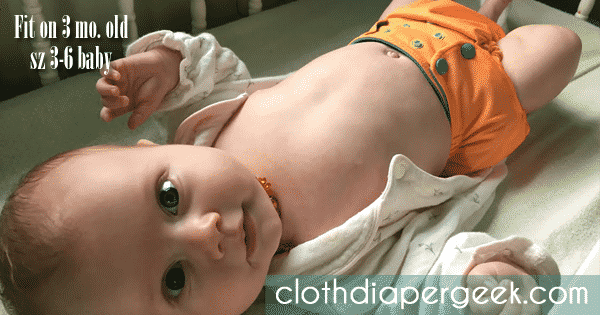 Right away, I was told that many people have found that the cover leaves abnormal red marks on baby thighs. According to Smart Bottoms, that is easily fixed by a few fit adjustments, not to mention the fact that red marks aren’t actually a problem most of the time. Honestly, red indentations left by diapers rarely bother me, so it’s something I don’t look for or notice in a diaper. Kim Rosas at Dirty Diaper Laundry wrote a blog post about red marks left by diapers.  She explains that much of our clothing leaves red marks that we don’t even notice: panties, bras, waistbands, etc. There is a difference between normal red marks, and red marks that actually cause irritation (like when you wear your hair elastic on your wrist for too long). Most of the time, the marks left by diapers aren’t really anything to worry about and don’t actually bother your baby. 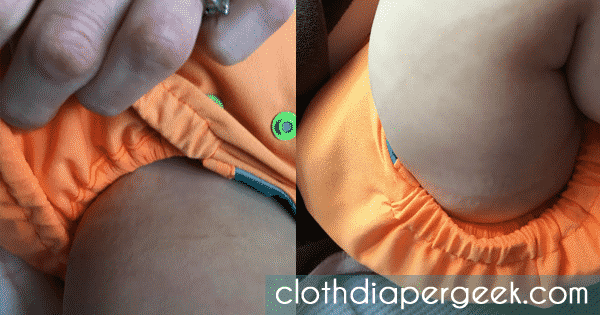 That said, I tried out the cover the way I normally use covers first: I adjusted the rise snaps to the usual height and put the cover on both babies without adjusting the leg gussets, being sure to snap the waist nice and snug. When I did this, there were, in fact, red marks on both kids. Had I not been looking out for them, though, I wouldn’t have noticed them nor would they have bothered me. So, I read through Smart Bottom’s recommendations and found that those extra deep leg gussets are supposed to fit right inside the groin crease of the baby’s leg. I never do that with any diaper, but that’s where my underwear fits me so it makes sense. I also read that there is no need to have a super tight fit with this cover. The next time I used it, I slid the gussets right into the inner leg crease. I also eased up on the rise for my daughter (it was already at the largest setting for my son) and I fastened the waist snaps more loosely, actually pulling the top snap in closer than the bottom snap to give some more room in the leg holes. The elastics are super stretchy so that this diaper cover doesn’t have to fit tightly to keep from leaking. After I made these adjustments, neither kid had red marks during the day. My three month old didn’t have red marks at night either. My son, however, did have mild red marks at night. I tried loosening the diaper as much as possible to alleviate that pressure, but he is maxed out as far as size goes and I cannot get the diaper any looser on him. I asked him if the marks bothered him at all and he said no. The next time I put the cover on him, I didn’t even ask him his opinion but he chimed in anyway:
“It doesn’t hurt me, Mommy.”
“What, the diaper doesn’t hurt?”
“Yeah.”
(Isn’t it nice when your kids can give verbal feedback?) 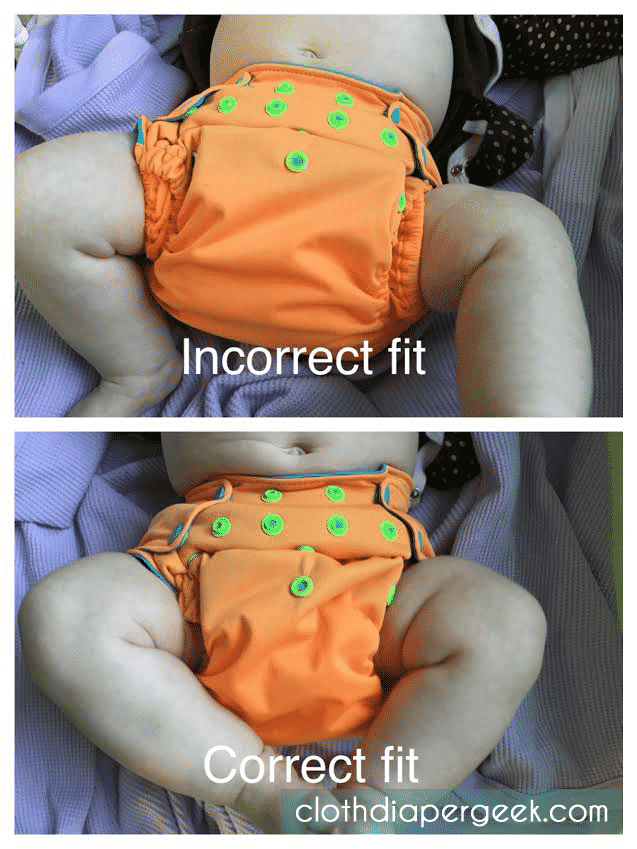 My conclusion: The red marks don’t bother me to begin with, but if they really do pose a concern, they are easily remedied by making adjustments to the sizing of the diaper. You just have to work to make sure you have the right fit with rise, waist adjustments, and by gently tucking those leg gussets into the crease between the groin and the leg. If the diaper still leaves marks, evaluate them to see if they’re the uncomfortable kind, because they most likely aren’t.

On a side note: I noticed that when I made these sizing adjustments for other brands and types of diapers, they stopped leaking as much too—even those without leg gussets. Color me impressed. I’ve been using cloth diapers for six years now and I’m still learning new things!

The sizing on this cover seems generous to me, not to mention that the deep leg gussets leave lots of room for thick diapers and doublers. There are two rows of ten snaps at the belly, and the closure tabs also have two snaps. The snaps at the waist are the opposite of most cloth diaper snaps. The elastics are encased in PUL and nice and stretchy. There are four rows of rise snaps allowing four different sizes lengthwise. I’ve tried the cover with a variety of different diapers and it seems to accommodate everything from a plain old snappied flat diaper to a fitted with a doubler. As I mentioned before, you don’t need to fasten the diaper tightly to get a good fit. With the super stretchy elastics and the leg gussets, you should be able to slide your finger comfortably under the elastics and still have great leak protection.

With the proper absorbency, this diaper shouldn’t leak for you. It has never leaked for my three month old daughter and in the times that my two year old son wore it at night, the waistband of his pjs were only wet once—and that was simply because I didn’t put enough absorbency underneath. I’ve never had another cover perform that well for him. He goes through pajama bottoms like you wouldn’t believe. Frankly, if a cover has a nice snug fit and you find night time leaking, one of three things has probably gone wrong: either your child’s clothing has found it’s way inside the diaper via the waist or the legs, there just isn’t enough absorbency, or the fit isn’t right.

I have used a variety of different diaper covers for six years and I’m not exaggerating when I say that the Smart Bottoms Too Smart cover is now my favorite. I absolutely love it. The fit is great, it doesn’t allow as many leaks as other brands (which I’ve come to expect with my heavy wetter son), it’s made well, and I love the color combinations. I was given this cover for free to review, but I would definitely purchase more now that I’ve come to love it. Without reservation, I highly recommend the Too Smart cover for anyone who uses diaper covers. And if red marks are an issue for you, they really do go away when you follow Smart Bottom’s instructions for a good fit, unless your baby is at the top of the sizing chart, like my son.

*Serging: One of many ways to finish the raw edge of the fabric. Thread is tightly wrapped around the edge. It’s commonly used to finish seams on the inside of clothing

Disclaimer: Becca was sent a Smart Bottoms Too Smart OS Diaper Cover free of charge in exchange for her feedback and honest review of the product.