I thought it would be fun to start a blog post series called “Uncommon Cloth” where I feature unique, unusual, or rare cloth diapers. 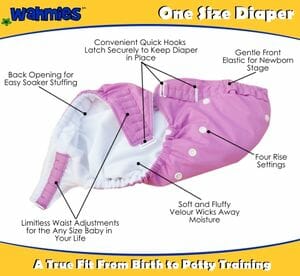 One of the first diapers I think of when I think of unusual cloth diapers is the Wahmies OS Cloth Diaper with s-hook closure instead of snaps.  You might be thinking…S-Hooks?  Really?

What is the Wahmies One Size with S-Hooks?

Wahmies One Size with S-Hooks came out in late 2007 according to my memory and blog posts documenting it’s debut.  There was quite a bit of buzz surrounding the launch of this unique new cloth diaper.  It turned out another small cloth diaper business had been producing diapers with this closure style pre-Wahmies, however Wahmies never claimed this was their new invention, at least not to my recollection.  In any event, it’s ancient history now, as Wahmies no longer produces the s-hook diapers.

They were very useful if you had a cloth diaper removing Houdini, but they also could be complicated to learn to use and tricky if you had a super wiggly baby.

Want to see this cloth diaper in action?  Check out this video from the Dirty Diaper Laundry video archives where Kim shares her review of what was a “new” cloth diaper at the time.

This diagram also shows you just how to fasten and adjust the diapers waist with the s-hooks.

So what do you think?  Do you like this concept?  Think it was just too over the top and complicated to really catch on?  Would the s-hooks have worried you?

Spooky Halloween Cakes you don’t have to be Martha Stewart to make!
Butterfly Gardening, If you grow it they will come!