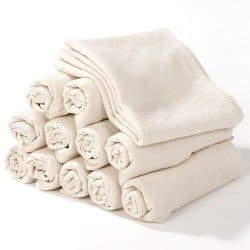 With Dirty Diaper Laundry’s second annual Flats Challenge quickly approaching I thought it’d be fun to take a closer look at flats. What are they exactly and why should you try to use them?

Elizabeth (aka Bert) is a stay-at-home-mom and contributing writer for She Thinks Media. She lives in the Twin Cities with her husband, Ben, her son Buggie, and daughter Lady Bug.  When she’s not trying to convince Buggie to expand his interests beyond Thomas the Train or put his pants back on she’s writing about her experiences as a mom on her blog, First Time Mom (FTM). After all, Bert maintains there’s a first time for everything, even if you  have more than one child!
Share
Pin
Tweet
0 Shares