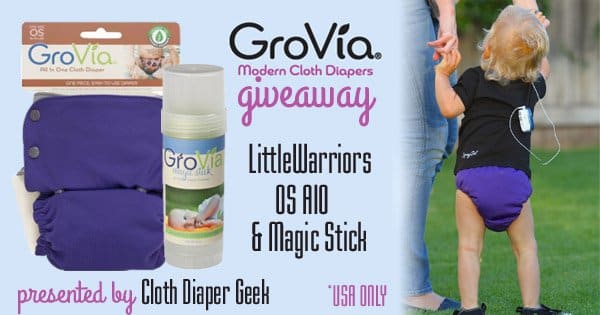 Today’s giveaway and blog post are very special and support a great cause.  There’s no doubt you’ve probably heard of Ryan Aprea, the son of Spray Pal’s creators, born at just 25 weeks gestation.  March of Dimes volunteers were tremendously helpful and supportive during the Apreas’ NICU experience, and when Spray Pal wanted to find a way to give back to March of Dimes, a collaboration was born!

When you support March of Dimes, you give hope to nearly half a million babies like Ryan who are born too soon each year. The money raised supports programs that help moms have healthy, full-term pregnancies. And it funds research to find answers to the problems that threaten our babies. Via the March of Dimes March for Babies, supporters have helped raise an incredible $2.3 billion to benefit all babies since 1970.

While I personally don’t have any experience with the March of Dimes, I have closely been following the story of Baby Oliver, son of Amii Fritz and owner of Up on the Hill Diapers in West Virginia.  Oliver, also born at just 1.9lbs and 25 weeks and following in Ryan Aprea’s footsteps as a fierce Little Warrior has overcome great odds and has been a huge inspiration.  After 16 weeks in the NICU he’s finally at home with his family and is doing well, such a miracle.

I have no doubts that the efforts of the March of Dimes has had a great impact and has contributed to the fact that the survival rate and viability age for preemies keeps getting better and younger!

Did you know that up until just recently babies born at 22 weeks gestation were considered “unviable” outside the womb?

The New England Journal of Medicine recently reported that 22 weeks may not be too young, proving that advancements in the treatment of premature infants keep improving, giving hope to those faced with the possibility of delivering early.

So are you ready to enter to win?

To get started entering to win I would like you to LIKE the pages embedded below and then claim those entries via Rafflecopter.

GroVia Cloth Diapers
Spray Pal
Cloth Diaper Geek
*This giveaway is open to the USA only. Winners must be 18 yrs or older. Winners will be emailed and have 7 days to reply and claim their prize.

MommyCon Orlando TICKET Giveaway: WIN (2) Tickets to this SOLD OUT event!
The Pre-Period Talk: My 12yr old shares what girls her age really know and think about getting their periods.